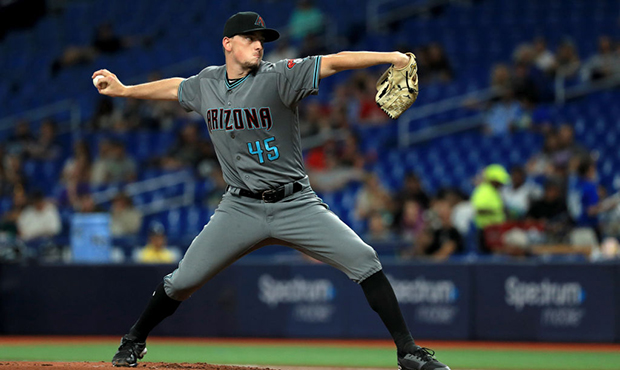 Two years later, it’s a completely different story for the 29-year-old right-hander. In 2019, Godley has a 7.90 ERA and has allowed a league-high 36 earned runs. He has a 1.780 WHIP and a 1.52 strikeout-to-walk ratio. Those are all career-worsts, as you might imagine.

Godley’s 4.74 ERA last year was already a step back from that ’17 campaign, but this season is even further regression to the point where the D-backs took him out of the rotation. And that’s where the story leads us next.

April 27: Godley’s last start before the D-backs made a change

Godley went 2.2 innings against the Cubs and allowed five earned runs. That was his sixth start of the season, and apparently the team had seen enough; Godley was moved to the bullpen after that and hasn’t made a start of any real length since then.

May 6: Godley comes on in relief

More than a week after his most recent start, Godley came out of the bullpen during a road game in Tampa. He pitched innings five, six and seven and allowed three runs on four hits, three walks and two strikeouts. He threw 56 pitches in a D-backs 12-1 loss.

May 7: Taylor Clarke gets the nod Because of two off days within the span of a week, the D-backs didn’t need a starter for quite some time after Godley was taken out of the rotation. When that spot did finally come up again, the time looked to Taylor Clarke. The right-hander recorded a three-inning save on April 20, but the May 7 outing was his first major league start.

May 8: Godley pitches in relief, again

In a 13-inning game to finish the series against the Rays, Godley came out of the bullpen a second time, this time recording a save in one shutout inning. He didn’t allow a walk or a hit and had two strikeouts, and improved his ERA to 7.49.

May 12: Godley gets another start, kind of

Godley didn’t exactly get his spot in the rotation back.

He was given the chance to start again, but unbeknownst to Godley, he went into the start with the team’s plan being that he’d only go through the opposing lineup one time. It turns out that took him two innings, in which he allowed one run on four hits with two strikeouts and 40 pitches, but that was it. He was removed from the game, and told reporters later that it was a surprise that he was used as an “opener” and not a traditional starter.

“You saw Zack get removed after two innings. It was obviously by design,” manager Torey Lovullo said. “We’ve been talking about that for a while.”

Godley pitched out of the bullpen again, working in the seventh and eighth innings. He allowed three runs on three hits, two of those being home runs.

May 18: Another start, but struggles continue The Diamondbacks gave Godley the closest thing to a “normal” start he’s had for a while on Saturday against the Giants. But he only went 3.1 innings, needing 73 pitches to do so while allowing four runs on six hits and two walks. Arizona lost that game 8-5 as Godley’s record moved to 1-4. His ERA worsened to 7.90.

Godley’s spot in the rotation comes back up on Friday, but because of an off-day, the D-backs have the luxury of moving Robbie Ray up one day to make that start. They will do just that, Lovullo told Burns & Gambo on 98.7 FM Arizona’s Sports Station on Tuesday. As for what the team does once they need another arm, that’s to be determined.

Clarke was not eligible to be called up for Saturday’s start against the Giants because it had been fewer than 10 days since he was optioned. That is no longer the case.

May 24: Godley notches another save

Godley was effective out of the bullpen for the D-backs. In the team’s 18-2 win, the pitcher went 3.0 innings, allowing just two hits. He also struck out two batters on his way to his second save of the season.

By the numbers: D-backs’ three-game sweep on road vs. Blue Jays