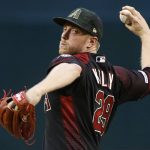 The Arizona Diamondbacks have joined every other Major League Baseball team in celebrating Armed Forces Weekend with special gear.

The D-backs have special hats they are wearing for the weekend and players have other specialty items to commemorate the theme as well.

The Los Angeles Dodgers’ Enrique Hernandez can be seen below wearing the cap, as well as camo socks for the weekend. Armed Forces Day is on May 18 and is celebrated on the third Saturday of May each year. A jersey patch is also on all jerseys and the side of the caps features an emblem to represent all five branches of the military.

Per MLB.com, the royalties earned on the sale of the items this weekend will be donated to military-focused charities.

Rosenthal: 4 rookies projected to start for Cardinals in 2019