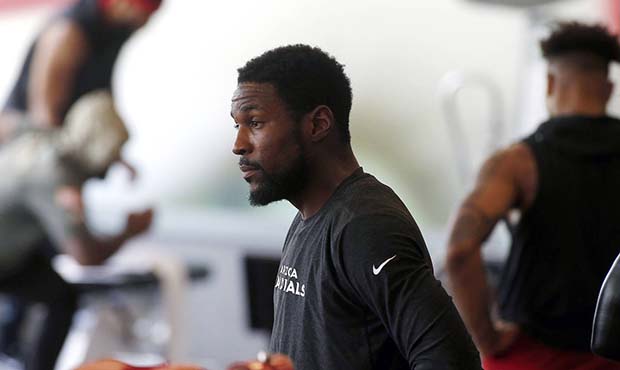 Voluntary organized team activities (OTAs) open for the Arizona Cardinals on Monday morning, and the lead storyline of what to watch in camp begins by discussing who won’t be there to watch.

Cornerback Patrick Peterson is expected to skip the voluntary practices to spend time with his family, even though his six-game suspension for PED use will not begin until the regular season starts.

Veteran corner Tramaine Brock is expected to earn a chance to win a starting role alongside fellow veteran Robert Alford in Peterson’s place, but rookie Byron Murphy will also have a chance to impress by playing in the slot.

That is just one major storyline to follow. The Cardinals, after all, are ushering in a new coaching staff and a new quarterback.

Here is what else the crew from 98.7 FM Arizona’s Sports Station’s Doug & Wolf is looking forward to watching at OTAs. They go four downs on the top four stories as the full team, likely sans Peterson, begins practicing. “It’s voluntary, he’s allowed to miss. But if you’re really a team leader facing adversity, shouldn’t you be there?”

“Could he ever help a Byron Murphy. The fact that Pat P … probably won’t be there, that hurts the Cardinals and Patrick Peterson.”

“I do not expect Patrick Peterson to be there today. He’s not going to show. He won’t be there until it’s mandatory; he’ll be there for camp and I think he’ll be instrumental in trying to get Byron Murphy ready, but get used to it Arizona Cardinals. You’re without one of the top cover corners in the NFL for the first six days of the season, and it starts today. ” “Granted it’s against ‘hard air’ — that’s a phrase I just made up. You’re not throwing passes against air (as a defense), but it’s hard air. What’s this thing look like?”

“I’m going to go O-line just because they’re getting ripped nationally. And I get it based on last year. But hello — it’s not the same O-line as last year.” “I can’t wait to see someone like Chandler Jones standing there at a practice and asking T-Suggs questions about different things that can be done.”

Ron Wolfley: How much man cover does Vance Joseph play?

“I want to see Jordan Hicks. What does he look like? Is he anywhere like the equivalent of baseball’s Jordan Hicks? Does he have that kind of speed and velocity out there? Can he get sideline to sideline? Does he have the leadership to tie that defense together? They are in such need of that middle linebacker, that MIKE, to be that guy.” “We are not going to give the receivers a failing grade in OTAs and declare you can never play in the NFL, but I would really like to see them prove they can at least get through OTAs. Can you catch, can you run the route, can you do what you’re being asked to do?”

“The guy who looks like a Vegas card dealer with that quick release, just dealing out there, throwing left and right and all over the field. We all know the best way to mask a lot of inefficiencies and weaknesses is via the quarterback. How much does Kyler Murray look like he could be equipped to do what very few do and excel as a rookie quarterback?”