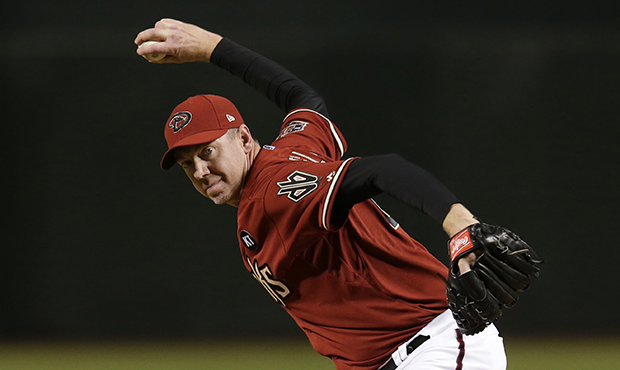 The Arizona Diamondbacks have had their fair share of closers in their first 21 years as a franchise.

Fifty years ago this year, the “save” became an official statistic for MLB after a sportswriter, Jerome Holtzman, introduced the specific rules for a save in the early 1960s.

Saves are a primary stat used for relievers and they are an indication of how well a pitcher performed in a close game situation with their team winning.

On the 50th anniversary, we rank which closers had the most saves in D-backs history.

Valverde has the most saves in D-backs history. He also was their most consistent closer in his time with Arizona. He was signed in 1997 as an amateur free agent out of the Dominican Republic. Valverde got his shot at the major league level in 2003 converting 10 of his first 11 save opportunities that year. Between 2005 and 2006 Valverde had 33 saves in 39 opportunities. Valverde’s best season in Arizona was 2007, during which he earned an All-Star spot and converting 47 of his 54 save opportunities, the most saves in MLB that year. The D-backs went to the postseason in 2007 and Valverde had one save and only allowed one run in both the NLDS and NLCS. In the 2007 offseason, Valverde was traded to the Houston Astros for Chris Burke, Juan Gutierrez and Chad Qualls.

Putz is the only D-backs closer to have two seasons of 30 or more saves in a season. After signing as a free agent in 2010, he converted 45 of his 49 save opportunities in 2011, which was 4th-most in MLB. In the playoffs, Putz gave up only one run, which was the Game 5 walk-off single by Milwaukee Brewers outfielder Nyjer Morgan to win the series. In 2012, Putz had a 2.82 ERA and had 32 saves in 37 tries. Putz had minimal closing success in 2013, converting only six of his 11 save opportunities. Putz’s career ended with the D-backs in 2014 and he currently serves as the assistant to the president and CEO Derrick Hall.

Mantei has the third-most saves in D-backs history. He was traded by the Marlins in 1999 and helped the D-backs get to the postseason by converting 22 of his 25 save opportunities from July to the end of the season. After an impressive half season, it looked like the D-backs had their closer. However, in the middle of the 2000 season, Mantei injured his elbow. That injury carried into the 2001 season and he eventually needed Tommy John Surgery in April. Mantei had a bounce-back year in 2003 when he picked up 29 saves in 32 opportunities. But 2004 wasn’t the same for Mantei as he picked up only four saves and had an ERA of 11.81.

Kim was an important part of the D-backs’ 2001 World Series team. Before that run, Kim had 14 saves in 2000 after taking over for the injured Mantei. In 2001, Kim and teammate Bret Prinz got most of the saves that season. But Kim got a majority of them, racking up 19 saves in 23 tries. He was the D-backs closer heading into the postseason and didn’t disappoint in the first two rounds. Kim had three saves and didn’t allow a run in the NLDS and NLCS. However, the World Series was a different story. He allowed five runs and blew saves in Game 4 and Game 5 after giving up a home run in the ninth inning in both games. Despite the dismal end to the postseason for Kim, he was an All-Star in 2002 and had 36 saves in 42 save appearances with a 2.04 ERA. After a successful season, Kim wouldn’t get another save for the D-backs, as he was traded to the Red Sox in the 2003 season for Shea Hillenbrand. Kim returned to the team in 2007 for two games, both of them starts. After being traded by the Oakland Athletics in 2011, Ziegler proved to be one of the D-backs’ best relievers. That catapulted him to the closer’s role in 2013 getting 13 saves in 15 opportunities. But 2014 didn’t go as planned. Ziegler only had one save and blew eight other save opportunities that season. However, he recovered in 2015, going 30-for-32 in save opportunities and posting a 1.85 ERA. In half as many games in 2016, Ziegler converted 18 saves in 20 tries. He was traded mid-season to the Boston Red Sox and was brought back to the D-backs in 2018 after being traded by the Miami Marlins.

Qualls was acquired in a trade that sent closer Jose Valverde to the Houston Astros in 2007. After becoming a D-back, Qualls had nine saves in 17 opportunities. In 2009, he had 24 saves in 29 tries with a 3.63 ERA. After getting 12 saves in 2010, Qualls was traded to the Tampa Bay Rays.

After playing for seven different teams, Greg Olson decided to sign with the D-backs in 1998. Olson had 30 saves in 34 attempts and had an ERA of 3.01 as the team’s first-ever closer. In 1999, Olson blew nine saves in 23 attempts, forcing the team to find another closer as it was vying for its first-ever postseason appearance.

Lyon was traded by the Red Sox in 2003 for starter Curt Schilling with the D-backs getting minor leaguer Mike Goss and two pitchers, Casey Fossum and Jorge De La Rosa in return as well. Lyon had 14 saves in 15 attempts in 2005 but blew all seven of his save opportunities the next season. Lyon had his most saves in 2008 when he posted a 4.70 ERA converting 26 of his 31 opportunities before leaving for free agency in 2009. In 2013, Reed was acquired by the D-backs for infielder Matt Davidson. Reed had 32 saves in 38 tries in 2014 with a 4.25 ERA. However, in 2015 Reed struggled and only had 3 saves. The D-backs ended up trading Reed in the middle of the season to the New York Mets for starter Matt Koch.

Gutierrez was part of the trade that sent Jose Valverde to the Astros for Chris Burke and Brandon Lyon in 2007. In 2009, Gutierrez had nine saves in 10 tries. Despite an ERA of 5.08 in 2010, Gutierrez saved 15 games in 17 opportunities. He was later released in 2011 by the D-backs after a disappointing season.

Hernandez was traded by the Orioles in 2010 for infielder Mark Reynolds. His most saves in a season came in 2011 when he picked up 11 saves in 14 opportunities. After that season, Hernandez had other save opportunities despite not being a closer for the team.

After being signed as an amateur free agent in 1995, Aquino made his major league debut in 2004. He had a good start to his career converting 16 of his 19 save opportunities with a 3.06 ERA. However, after that season he was only able to get one more save. In 2006, the D-backs traded him to the Brewers for pitchers Doug Davis and Dana Eveland and right fielder Dave Krynzel. Bell was involved in a 3-team trade that sent Chris Young to the Athletics and the Marlins sent Bell to the D-backs. Despite having three straight All-Star seasons with the San Deigo Padres from 2009-2011, Bell’s time with the D-backs was a disappointment. He was only able to get 15 saves in 22 opportunities and had an ERA of 4.11. Bell was traded to Rays after his only season with the D-backs in 2013.

Diamondbacks lose fifth in a row as pitching struggles vs. Giants

Rookie Or Not, Kyler Murray Knows What He’s Doing For Cardinals

War of Will rebounds from rough Kentucky Derby to win Preakness