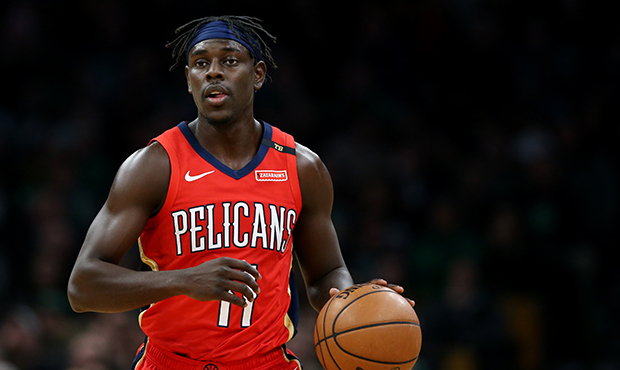 Winning the NBA Draft Lottery would have been an easy out for the Phoenix Suns. Even getting the second pick would provide an appealing core piece to the puzzle.

Instead, the Suns will draft sixth overall barring a trade. There, it’s possible they could get a raw but talented future point guard such as Vanderbilt’s Darius Garland, as many mock drafts project. Phoenix could also wait everything out and find a veteran point guard in free agency.

Yet the lottery also clarified the trade market because a few teams who already have point guards will draft before the Suns, perhaps changing their respective stances regarding their current roster outlooks.

Below, you’ll find a look at how the lottery results have impacted the Suns’ search for a veteran point guard in terms of trades only. That will then set us up to understand what strategy GM James Jones and senior VP of basketball operations Jeff Bower must do in the draft and free agency to fill their biggest roster problem.

Listing a point guard below isn’t necessarily what I think Phoenix’s front office should do. It’s just a league-wide glance at what they could do. Think of it this way: It’s a potential list of realistic trade candidates at the point guard spot that could appear on the Suns war room whiteboard.

By the end of the exercise, it’ll probably become clear this specific task won’t be easy for Jones and Bower — and that free agency and even the draft will likely be needed to fill the point guard hole. New Orleans won the Zion Williamson sweepstakes, but The Athletic’s Shams Charania reported that hasn’t changed star forward Anthony Davis’ stance on wanting out of town. Head coach Alvin Gentry acknowledged the Pelicans have yet to work things out with Davis since GM David Griffin took over.

Those decisions and conversations will likely sway what happens to veteran guard Jrue Holiday, a soon-to-be 29-year-old who averaged 21 points, 5.0 rebounds and 7.7 assists per game last year.

New Orleans landing Williamson leads us to believe Holiday has more of a chance to stick around regardless of what happens with Davis. Also, he’s really good, and Phoenix not landing a higher pick in a weak draft doesn’t help them if they’re trying to compile enough assets to get a deal done. Memphis has already told teams it won’t draft anyone other than Murray State point guard Ja Morant, according to ESPN’s Jonathan Givony, wanting to form a stellar duo with he and Jaren Jackson Jr. What’s that mean for Mike Conley?

With two years left on his deal that pays out more than $32 million each season, the 31-year-old lands in an age range that doesn’t seem like the right fit for the Suns, according to Jones.

“For the most part, our team is all under 22,” the GM told Burns & Gambo before the February trade deadline. “So if you try to add someone that’s 33-34 years old, it usually just doesn’t work. There’s too big of a gap.

“Especially when you factor in the speed and the pace of the game has increased, the elite players, there’s very few of those guys between the age of 32 to 35 that maintain a high level and take a jump.”

One could also argue that Memphis wants Morant to sit behind Conley for at least a season to learn his craft. Givony reports they are willing to use a small backcourt of Conley and Morant until a fair trade is offered.

Potential for a Suns deal: Unlikely now, but ask us again in February if Morant takes off. Well, imagine having the same profile as current Suns point guard De’Anthony Melton but being even worse on offense and a negative on defense. I doubt the Suns would be interested.

If for some reason Morant fell to the third overall pick and slipped past Memphis, New York wouldn’t need as much point guard depth. Either way, it doesn’t really help the Suns.

Potential for a Suns deal: Just, no. This is where things get interesting for Phoenix. Its reported connection to the talks between the Lakers and Pelicans regarding a Davis trade last season before the trade deadline will likely remain something to watch.

Ball’s father even went on 98.7 FM Arizona’s Sports Station and suggested his son would enjoy joining the Suns.

Here’s the thing though: Los Angeles doesn’t currently have an acting basketball person in their front office after Magic Johnson’s departure. Who in the world knows what they’re thinking or what Johnson’s replacement will do? That person could keep the LeBron James-Kyle Kuzma-Lonzo Ball-Brandon Ingram core together or push to get a Davis deal done. But hey, if you’re the Suns, you call the Lakers and offer the No. 6 pick straight up for Ball to see how it goes.

Adding to the complexities is Garland pulling out of the NBA Draft Combine, perhaps because he received a high lottery promise. He is represented by Klutch Sports, the same agency that manages James. And because the Suns weren’t the one to guarantee drafting him at No. 6, per 98.7 FM’s John Gambadoro, the Lakers would be a solid bet to have done so at No. 4.

Potential for a Suns deal: There’s potential for a deal, but the Lakers are wild cards. Even if Garland isn’t drafted by Los Angeles, this could still heat up around free agency if the Lakers look like they can land Davis or need cap space for a series of big signings. Call me if you have a fully operational crystal ball.

Money would be on the Cavaliers moving on from Sexton had they been able to draft Morant. Is that still on the table if they like Darius Garland here?

Potential for a Suns deal: Not likely. If Garland is taken by Cleveland, maybe Sexton hits the trade block. But Sexton is a project himself, and the Suns will likely want to either draft a point guard or just pay a vet rather than give up assets to acquire a work-in-progress. Fred Van Vleet ($9.3 million) and Lowry ($33.5 million) are entering the final years of their contracts. If Kawhi Leonard wants to return to Toronto on a long-term deal — it’s recently been suggested he might consider it — and the Raptors want to shave their payroll, the difference in their salaries is all you need to know about which one should be retained.

Lowry averaged 14.2 points and 8.7 assists per game for the Raptors this season and despite shooting woes (41% and 35% from three) brings all the winning things that you want in a veteran point guard. But again, he would be a rental for the Suns while being less of an impact player and older (33) than Conley.

The T-Wolves will deal with Tyus Jones’ restricted free agency this summer as the 30-year-old Teague comes off a year in which he averaged 12.1 points and 8.2 assists per game. Teague is on an expiring deal at $19 million in 2019-20.

Jackson is on an $18 million expiring deal. A meh-efficiency, score-first point doesn’t seem like the optimal pickup unless the Suns can give up pennies.

Jackson, though, is in the 29-year-old age range, which sort of fits Jones’ description of what he’s looking for.

Ditto to the Jackson possibility for Schroder. He’s a worse shooter but makes a little less cash at $15.5 million over the next two seasons. Phoenix might as well check in. The return of point guard Dejounte Murray from a season-long injury and rise of shooting guard Derrick White could push Mills out of the rotation, in theory. Two years of more than $12.4 million each left on his contract is a reason the Spurs might move on, however. That also might make it hard for the Suns to trade for a player when they could just get the same type of dude in free agency.

With a similarly-sized player option as the Suns’ Tyler Johnson, Dragic comes off a season in which he appeared in 36 games and started just 22. He shot 41% from the floor and averaged 13.7 points and 4.8 assists. If healthy, perhaps he could return to form, but the Suns might not want to give up much for a one-year rental.

Cardinals should not give up on suspended Patrick Peterson